After having watched the first semi final of the Eurovision Song Contest, the Swedish interval act Tingeling is about ten times funnier than it was the first time I watched it: (Skip to 4.15 for the music part.)

This was done as a parody on Russian culture, and then the Russians themselves go and do exactly the same thing for their real, 100% serious interval act:

But the thing that kills me is that the Russian embassy in Sweden handed in an official complaint to SVT (Swedish television) saying that the parody was humourless and insensitive. (Or something along those lines.)

And while we’re on the subject of interval acts, the best one I can remember was the Stockholm 2000 one:

Finally, my favourite contestant won the Swedish final for the Eurovision Song Contest. Can’t remember when that happened last.

Obviously, I have to do my part to promote the song, so here goes.

Malena Ernman won with the song La Voix, which is half disco/techno/pop and half opera. A cool mix, and I hope it is memorable enough to do well in Moscow. At least better than Sweden has done the last couple of years. (18th place both 2007 and 2008.)

Here is her performance in the Swedish final, where I think she sang better than in the qualifying rounds. The powerful bits are less harsh or screamy if you will. 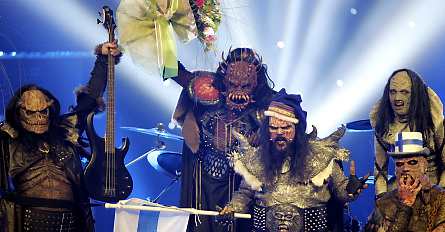