Once More: Firefox 3 is Not Bloated

Just in from the insane-browser-prophecies department:

Despite the fact it’s not really ready for human consumption, Chrome has won. Firefox is already dead. The only way the situation can be altered is for Mozilla to slam on the brakes, lean out of the window of the truck, apologize for going the wrong way, and turn around. But that’s unimaginable.

Well, that will only be true if all Firefox users migrate to Chrome. Why would they do that? Chrome does not provide any advantages that seem significant enough for a long-time Firefox user to switch.

If you consider how many Firefox users that have special extensions installed the above scenario seems even more unlikely. Even if Chrome did have equivalents for all the Firefox extensions, it doesn’t provide enough benefits to motivate the hassle of swapping out Firefox.

And what has Mozilla to apologise for? Ripping up Microsoft’s monopoly? Opening the doors for standards based coding?

Kier and others are making out that Firefox has become bloated and slow. So I decided to do a quick comparison of the different releases of Firefox on my four year old AMD 3200+ Windows XP PC. 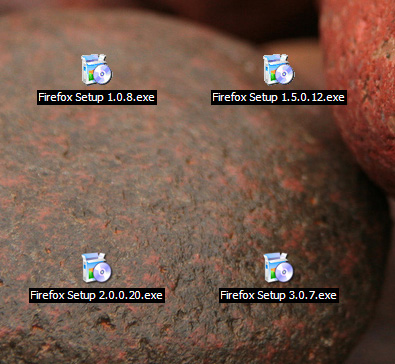 I set up a clean profile for each version and set them to open a blank page by default. Then I made sure to close all other programs and launched each version of Firefox five times in a row, timing the launches with a stopwatch. (From hitting Enter to seeing the big white browser window.) And then I repeated the whole process so I got ten values for each browser.

I tested my reaction time which was 0.23 seconds on average and subtracted this from all the measured times.

So here is a visual comparison of the launch time for the different versions of Firefox since 1.0 (averages of ten measurements): 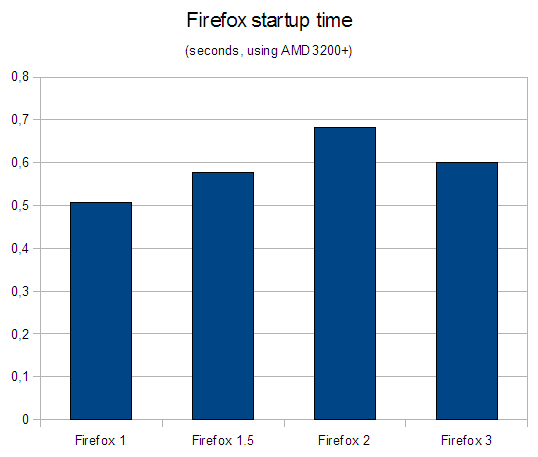 Firefox 1 took just over 0.5 seconds on average. Firefox 3 takes 0.6 seconds. That’s a difference of 0.1 seconds on a four year old system. On a newer system the difference will be even smaller.

I also tested the cold launch times, by rebooting windows between each startup. These are averages of five start-ups: 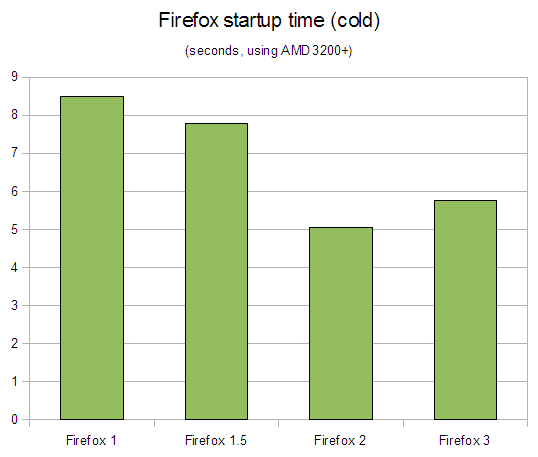 I also tested average page loading times for DN.se, a fairly heavy page with plenty of Flash and images. 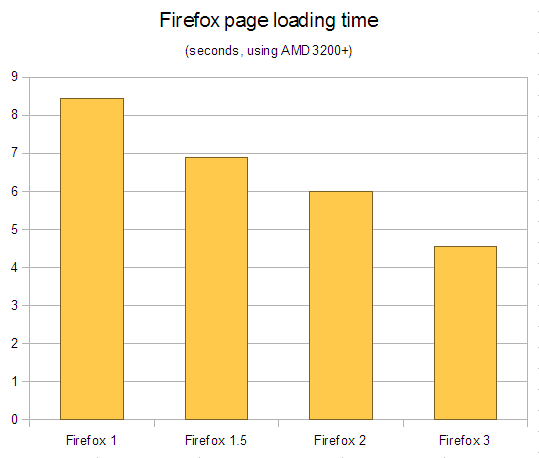 Again I did five measurements for each version. Then I repeated the procedure, just to make sure no version was being helped by network caching. (I also loaded the page a few times before starting the test to make sure no browser was disadvantaged by being first.)

Between each page load I cleared all history, browser cache and cookies. So these values should be pretty representative for cold page load times for pages with plenty of images and Flash.

So, Firefox 3 takes roughly 20 percent longer to launch than Firefox 1 for warm starts, which equals at most one or a few tenths of a second. For cold starts (first start after booting your computer) Firefox 3 launches about 30 percent faster than Firefox 1. Also, each page load in Firefox 3 is probably saving you several seconds compared to Firefox 1.

We already know that Firefox’s memory consumption has gone down a whole lot and Javascript speed was improved by a factor of 3 or 4 for version 3.

Yes, Firefox has added many features since version 1.0. But it just hasn’t gotten bloated in the sense of unnecessary features that get in the user’s way.

Quite the opposite is true in fact. The Firefox developers have thoughtfully added many capabilities to Firefox without forcing mums and grannies to jump through hoops when they want to go on-line. At the same time they have made it load web pages much faster, and cold starts are much quicker. Warm starts are marginally slower.