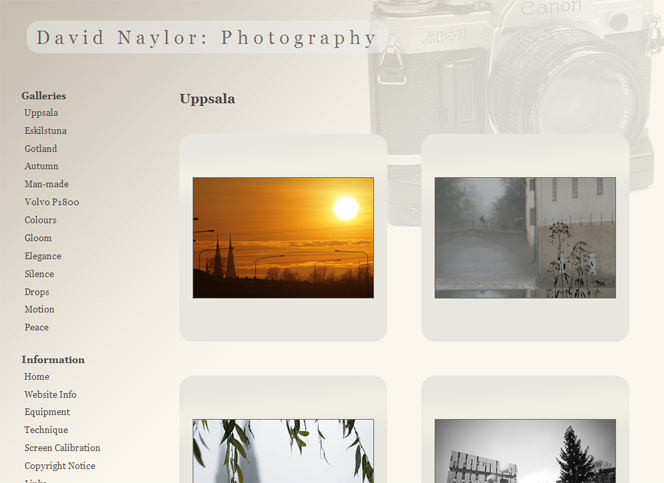 Most of the photos have probably been on here sometime or another, but I felt it was time to update the site. Last time I touched it was in April …

Posted in photography | Comments Off on New Galleries

First of advent in Uppsala

Me and Jenny went to Uppsala over the weekend and among other things I had some fun with my camera in the city centre.

The local paper, Upsala Nya Tidning, put on a firework display every year. This time I didn’t have my real tripod with me, only my gorillapod.

I found a granite pillar to rest it on, but this meant I was limited to horizontal shots and couldn’t readjust the camera very easily during the display. So all in all I didn’t get very many good shots of the fireworks. The one above is pretty much the only interesting one I got.

Anyway, I managed to get a few other nice frames before I headed home. Here is the huge crowd of people making its way away from the castle after the fireworks.

I got the above shot of Uppsala castle and the Gunilla bell tower, or Gunillaklockan as it is called really, as well as one of the Fyris river, or Fyrisån. The sky was lit up with a blue light. Not sure what it was, but it made the pictures pop a bit anyway.

In Uppsala the local council have built a plastic skating rink on Vaksala torg, one of the large market squares in town.

It was officially opened on Sunday and a number of people were trying it out.

Tags: black and white
Posted in photography, Uppsala | Comments Off on Skating on plastic