If you didn’t know, Mozilla Links is the name of a brilliant new Mozilla news site. 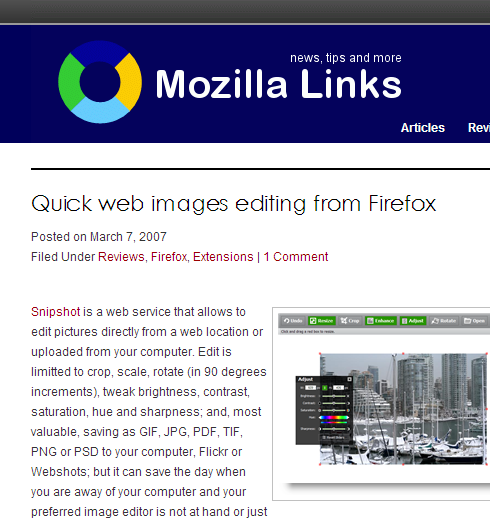 They update often, with articles on stuff that happens on the Mozilla scene. Percy Cabello, who runs Mozilla Links, also writes reviews of interesting Firefox extensions and posts useful tips and tricks.

MozillaZine was for a long time the one-and-only website for Mozilla-related news. But around at the same time as they introduced the ads, things started to go downhill.

Now I feel that anything I read on MozillaZine I have already read somewhere else. And the comments after the articles are seldom very lively nowadays. (Perhaps because we don’t get the bimonthly name-changes for the Mozilla products any more…) I don’t actually think that the change has anything to do with the ads though. In fact, I’m not even sure that MozillaZine really has changed. It could just be that my news-gathering patterns have changed. I (obviously?) read many more blogs now than I did a couple of years back.

Anyway, for the Firefox aficionados, Mozilla Links is a great resource. Don’t forget to add it to your RSS readers.