Just like last time Mozilla did a big release, addons.mozilla.org is getting a facelift. 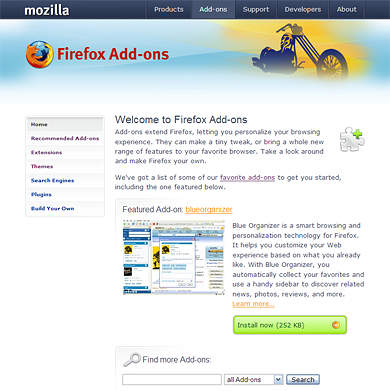 The fact that plug-ins and search engines also are listed as add-ons indicates that they will be merged in future versions of Firefox. That’s to say, extensions, themes, search engine plug-ins and regular plug-ins will all be managed using the add-ons manager (which now in version 2 contains only themes and extensions).

The You’re firefox has been updated page has been given a similar design, so I presume they will be redesigning the main Firefox page too. A good addition they’ve made to the you-have-updated page is a link for installing spelling dictionaries. Great thinking there – a great way to promote one of the main advantages of Firefox 2 over IE7.

Update: Yeah, Firefox 2 has now been released and the main mozilla site has also had the redesign.

Posted at 19:46. Tags: Mozilla. Categories: Mozilla Firefox. Both comments and trackbacks are closed.