IE7 Only Half Way There

I guess I was just a little curious to try out IE7, so I have now installed it, although I said I wouldn’t… 🙂

But before doing so I created a system restore point so that I could go back properly, if necessary. (I believe IE7 is uninstallable, restoring IE6, but I wanted to be safe – not sorry.)

To begin with, I’ve somehow got the feeling that some think we should just be kind to the IE devs and like IE7, since they are very nice people and they have worked very hard, and after all, IE7 is very much better than IE6. But I don’t buy that. In 2001, Microsoft messed up – and even five years later with IE7 they haven’t caught up with the competition on some major points.

Sure, the individuals in the IE team have worked their gluteus maximuses off to get IE into it’s current shape, and deserve credit for their work. Keep it up! But the fact remains that it is not yet on par with Firefox et al., and I believe the leadership that killed IE development back then should hear that.

Anyway, lets start with the goods.

Internet Explorer 7 feels snappier than version 6, which is a positive surprise. I was really expecting it to feel more bloated.

They’ve done a good job in maximizing the website canvas. And the strive to maximize the canvas was probably what made them remove the menus and put those commands over to the right. There’s been a lot of whining about those changes, but frankly, I think they work quite well. 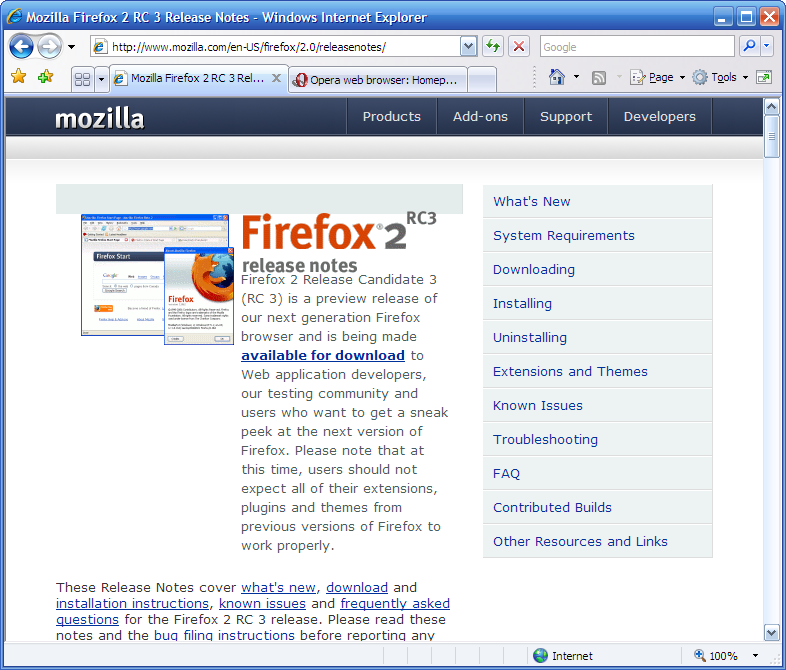 Tabs have been made discoverable in a very nifty way. There is always a tab visible, but without stealing a whole bar of screen space. The new tab waiting at the end is sort of cool, but I think Firefox’s button is more practical, especially if you want to open more new tabs in one go.

I did say IE7 was quicker than IE6. Sadly, IE6 hasn’t been a benchmark for browser speed for quite a few years. So IE7 is still quite a way behind Firefox. (And that’s comparing to a Firefox installation with a ship-load of extensions.) The most annoying slowness in IE7 is when opening new tabs: Hit Ctrl+T, and there are two discrete phases until your cursor is actually sitting in the URL bar waiting for you to type. First a tab is opened in the background, saying Connecting…. (Why??) Then focus is switched to the new tab, which changes title to Welcome to Tabbed Browsing. All of this takes roughly one-mississippi, while in Firefox you get a new tab in about one-.

Having the stop and reload buttons at the right end of the URL bar does not make sense. They are both buttons that you want within quick reach if there’s to be any point in having them at all.

It beats me that you can’t rearrange the buttons as you want. (So we could move the stop and reload buttons to a more practical position, perhaps.) In 2006, you’d have thought rearranging buttons would be possible in any old browser. Even stranger is the fact that if you right click within the top toolbar, you get the alt+space menu popping up where you clicked. Makes it feel like a beta… or an alpha, by Firefox standards.

Quick Tabs is mentioned as the feature that Firefox doesn’t have. If you’re asking me, it’s cool, but not in a usable way. It’s only cool in a wow, look what you can do! kind of way. I can’t think of any situation when it would actually be quicker to use the Quick Tab feature than to navigate the tabs in the traditional ways. Even if I open loads of tabs, I don’t get the feeling that Quick Tabs actually saves me any time. But as I said, it does look cool: 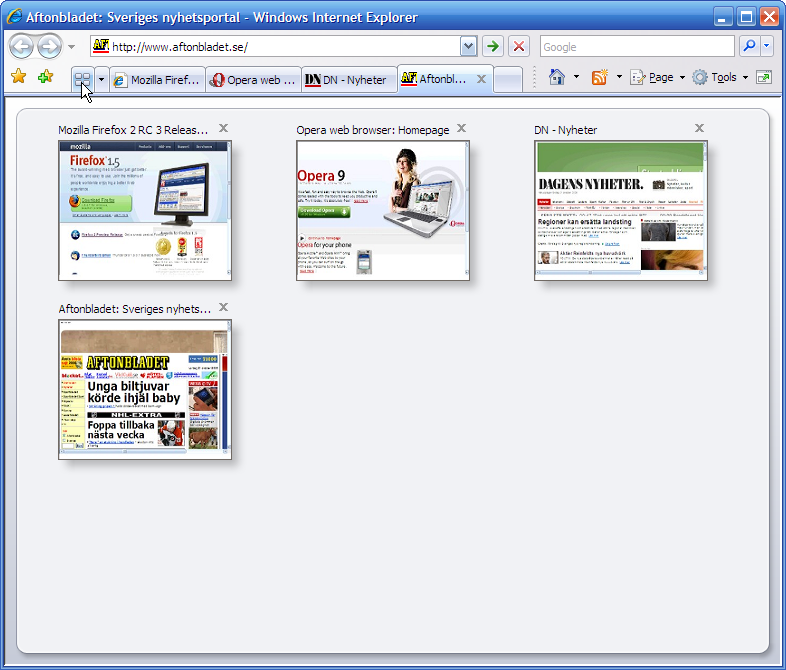 For some obscure reason they’ve chosen to stick the off-by-default menu under the URL bar, if and when you switch it on. It strikes me as ironic that no other software company brakes the UI design guidelines for Windows as often and as seriously as Microsoft…

Another weirdness is that the Tools command and the Tools menu contain slightly different menu items, and because of that use different accesskeys. I expected them to be identical.

While IE7 was a positive surprise when it came to speed, it was a disappointment when it came to standards. I was under the impression that the IE Team had basically fixed the CSS stuff that web devs wanted. When I checked my blog design yesterday, I realized they haven’t. Max-width for instance, which is a very useful CSS property, has not been implemented. This will probably be my main reason for letting Firefox stay in charge of my http transfers.

So, if you don’t believe in the ideological reasons for sticking with Firefox, you might like to know that Firefox 2 will have some very real advantages over IE7. And it’s only days away.

I already mentioned the speed, and the rendering engine being in an entirely different league. Firefox 2 can also undo closed tabs. This, folks, is a very usable feature. Just hit Ctrl+Shift+T and you’re back at the page where your brain had a temporary glitch and made your fingers hit Ctrl+W although you didn’t really want them to. You can also find recently closed tabs on the history menu.

Firefox also has a built in spell checker for forms. This is another feature in the list of Firefox features which just work, and work very well. Incorektly spellt wordz are underlined in red, and Firefox almost always gets the first spelling suggestion right.

Then we have the Firefox extensionsphere. If you ever catch yourself thinking Oh, I wish Firefox could do such and such a thing, you can bet there’ll be an extension at addons.mozilla.org which will do exactly what you want. One-thousand-eight-hundred-and-ninety-six free extensions, just waiting for your imagination to find them.

In a me-too spirit, Microsoft have launched ieaddons.com. But if you look at what it actually contains, you’ll see that it is basically just a showcase of the toolbars and add-ons for IE6 which made people switch to Firefox in the first place…

Admittedly, there are a few useful things there too, but very few are as simple and pure as Firefox’s extensions.

Wait a minute… um … bookmark managers? Is that a freudian slip of the tongue from Microsoft? 🙂

Phew! I didn’t intend for this thing to get so long… Sorry! Anyway, you get the idea: I’m sticking with Firefox, and if you’re ever planning on visiting my websites again, I hope for your eyes’ sake that you do to!