Songbird – Pretty Fly For A Blackbird

Songbird has just been released by… er… I believe I don’t know who made it. Well, I know many of the developers behind Sunbird are ex-Winamp people. The website has just been slashdotted so it might take a day before you can get there. Anyway, the Slashdot post has a few mirrors for the time being.

Well, it seems pretty good for a 0.1 release. The slick, black interface is nice: 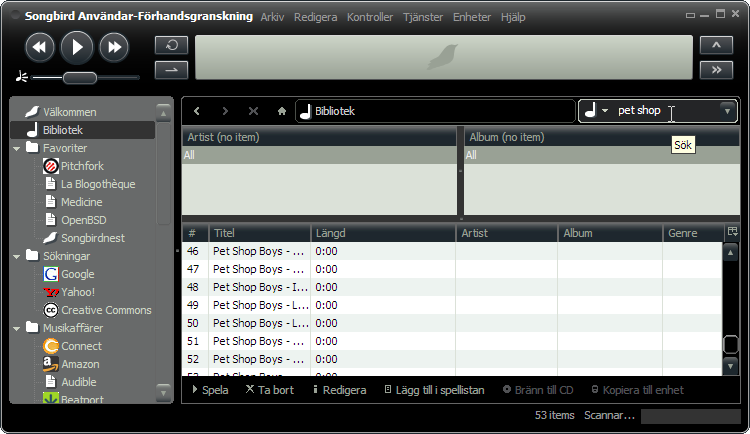 Also, I can choose my language (Swedish) from the help menu. I was impressed by the fact that they had included Ogg playback capabilities already. Of course, there were a few obvious bugs:

I would love it if I could access AllOfMP3 through Songbird. But I feel very handicapped without Firefox’s tabs. Maybe they will be added in the future? I know Songbird isn’t meant to be a full fledged web browser. But when I was looking around the various music shops in the sidebar I realized that I would need tabs in Songbird too, to feel at all efficient.

Posted at 17:52. Categories: Uncategorized. Both comments and trackbacks are closed.