I just noticed that IE7 beta 2 has been released. Sounds like the IE team know their stuff. It has (almost) everything that I love about Firefox. The only things I can think of are…

However, even if IE7 were just as good as Firefox on every point, or even slightly better, I would still stay loyal to Firefox. Simply because Firefox gave me this perfect mix of simplicity and features way before anyone else did. Why walk out on the guy that saved you, just because the guy who left you out in the cold for four years says he’s going to be good again?

If I only could get SP2 to work properly on my computer I would install IE7 in order to test this site and others. Since SP2 had a habit of drawing random turquoise lines across my screen, I won’t be doing that. So I’d like to ask anyone reading this in IE7 to report back to me about how things look. This is what things should look like: 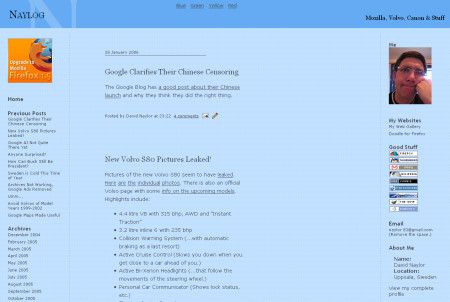