My old theme Doodle has been updated by ogirtd. He’s done some great work to make it work with Firefox 1.5. Go and get it over at addons.mozilla.org. 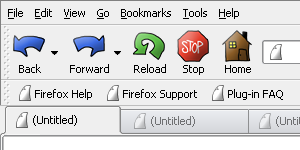 Thanks to ogirtd (of whom I know very little) the Doodle theme has now been updated for Firefox 1.5! Thanks again, ogirtd!

It looks like Firefox 2 may be getting an anti-phishing feature based on Googles Safe Browsing extension.

While it’s not yet certain that this feature will make it into Firefox 2 (as I read it anyway), it seems to have become just a little bit more likely. The Firefox 2 Feature Draft Plan has the anti-phishing feature listed as a class 3 priority. I don’t know if the current events change that, but… Anyone in the know… er … who knows?

Some guy has successfully installed 100 Firefox extensions. A nice test of Firefox’s extension mechanism. Turned out it was pretty stable…

Tags: Mozilla
Posted in browsers, Mozilla Firefox | Comments Off on Firefox on Steroids

The bug for rgba and hsla css colours has just been fixed on the Firefox trunk. That means it will be released with Firefox 3, in about a years time.

Can’t wait till we can start playing around with semi-transparent colours… Also, the hsl colour model is very nice – making it possible to think in hue, saturation and lightness when choosing colours. Very nice 🙂

It’s just a shame that Firefox 3 is so far away.

Edit: Fixed an error. (Had written brightness instead of lightness.)

Svenska Dagbladet, or SvD for short, are using Firefox’s RSS icon on their website: 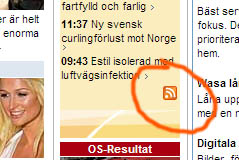 Actually, come to think of it, this is the IE7 version of the icon. Typical. At least to me, they don’t look 100% identical. The Firefox version stands out more – the IE7 one looks flatter.

Ben Goodger has written an interesting article about what happened before Firefox, and what led a few developers to basically scrap the whole UI of Mozilla and start again.

I didn’t know (until now) about the serious conflicts between Mozilla engineers and Netscape leadership over user interface. This was back before Mozilla Foundation was created.

The following bit was also interesting:

There was and remains much resentment towards Firefox and its development model. At its creation, there was much shouting about how the many were not always smarter than the few, the merits of small development teams with strong centralized direction, the need to adhere strictly to Mozilla’s module ownership policy. In practice, these statements resulted in effectively locking everyone but the Firefox team out of the Firefox source code. We railed against the inefficiencies of past UIs. We were unnecessarily harsh, and polarized opinions. We had been badly wounded by the Netscape experience and the disorganization that had followed. I don’t think a lot of people understood that. It wasn’t something we could easily communicate.

I remember there being a clear division between Suite devs and Firefox devs, when I was hanging at MozillaZine. I knew that the division was because of the tight control that the Firefox leads maintained, but I didn’t know the underlying reasons behind that tight control – other than wanting to optimize the user experience.

Since they had worked on a browser that looked like this… 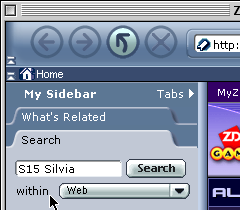 …their concerns were understandable.

MSNBC Has a Great Firefox Article

MSNBC has published a great review of Firefox 1.5. It raises a few good points:

It also talks about a few of Firefox 1.5’s weaknesses.

I know* at least those two issues will be fixed in Firefox 2.0.

They also claim that Firefox’s bookmarks managing system is no good. Not sure that I agree with them there. It maybe isn’t optimal yet, but it sure is lightyears better than IE’s and at least as good as any of the other bookmark managers out there.

*) Based on the Firefox 2.0 Product Plan Draft.

Tags: Mozilla
Posted in browsers, Mozilla Firefox | Comments Off on MSNBC Has a Great Firefox Article

The great thing is that everyones favourite extension list looks different. Firefox extension system allows you to add just those cool/useful/slick features you yourself like.

There’s also a whole bunch of other extensions that I’ve got, but which I use less regularly. These are maybe also slightly less interesting to the broad masses:

You often hear (as a reason to use Opera instead of Firefox) that Firefox’s extensions will interfere with each other and won’t play nice.

All my current extensions work perfectly together. In fact, I can only remember having one slight problem with extensions treading on each others toes since I started using Firefox 1.0 one year ago: The Web Developer and Tab Sidebar extensions use the same keyboard shortcut, Ctrl+Shift+T, which resulted in only one of the extensions responding to it.

Well, we’ve only just been given Firefox 1.5, so people maybe think I should just be happy and use it. But now I caught a glimpse of the Firefox 2.0 product plan (draft)…

There are some nice tweaks in there, which we should have in our hands for next autumn possibly. (Their release plan, which says 2.0 final by late june sounds, as always, completely unrealistic.)

Some things to look forward to:

The session saver could become a bit of a feature hurdle for novices, but I trust the Firefox engineers will make sure it won’t be.

Tags: Mozilla
Posted in browsers, Mozilla Firefox | Comments Off on Firefox 2.0 is going to ROCK!

IE7 to get Firefox's Feed Icon

The Microsoft RSS Team has just announced that IE7 will be using Firefox’s feed icon. How many people would have thought that a year back? A week back?

It’s really cool that MS are working so cooperatively with their competitiors at the moment. Maybe they have to? Who knows.

I only wish they would do something along the same lines with their rendering engine. Either use Gecko (I can always dream, right?) or make Trident as standards compliant as the best (the rest).

Edit: Oh, and thanks jer for the nudge!

Tags: Mozilla
Posted in browsers, Mozilla Firefox | Comments Off on IE7 to get Firefox's Feed Icon

When I’m reading things on the Internet I always come across words that I don’t understand. Wheat I’ve done up until now is to select the word, righ-click and do a web search for that word. That has taken me to google, upon which I’ve clicked [definition] to get me to answers.com.

I’ve been thinking for a long time that it would be great if that context menu search went straight to answers.com to save me the wait and extra click. I just didn’t know how or if it was possible to change that search URL. Well, since this is Firefox we’re talking about – of course it is:

In about:config, filter for search and then simply change the value for browser.search.defaulturl to http://answers.com/.

That’s a huge improvement, at least to me! I don’t seem to be able to use Wikipedia here though, since the search term placeholder %s doesn’t seem to work. Anyone know of a workaround?

This sounds really cool. Can’t wait to try it out, or at least to read some real reviews of it.

Firefox 1.5 has just gone live over at mozilla.com. Go and get it while it’s hot – take those servers done once and for all. 😉

Yes, that’s mozilla dot com – not org. The new website has been set up to better display/promote the mozilla products, without having all the projects and foundation stuff getting in the way. It’s looking pretty sleek if you ask me: 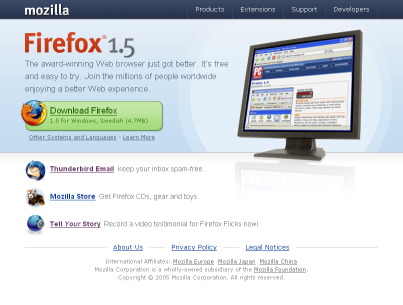 The mozilla addons website has also had a nice refresh: 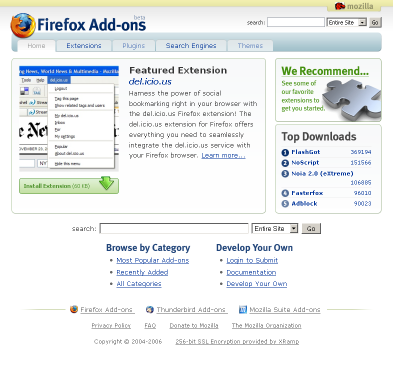 A search engine plugins section has been added too, even if the selection available still isn’t very large. (Maybe 30 odd search engines are listed, with a pointer to mycroft for a larger selection.)

Now I’m just waiting to see what they are conjuring up at spreadfirefox.com: 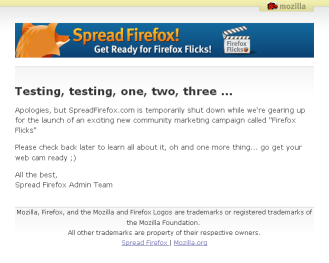 Edit: Added a Firefox 1.5 graphic to the left column.

Judging from the ironic tone in this post by Tritan Nitot of Mozilla Europe, Firefox 1.5 will preusumably be released on 29 November. That’s tuesday next week – nice. 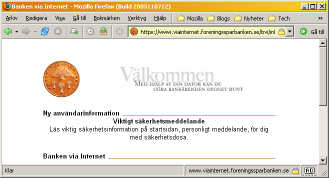 Tristan Nitot has an interesting blog post about various factors which could explain the widely differing Firefox percentages throughout Europe.

It’s been great to see how Firefox really has spread throughout the world during it’s first year. For the second year, lets hope Firefox ends up on many many more computers. Maybe with a little help from Google… Can’t wait to see Firefox reach 25%, which I’d say is the next magical number. Feels good to know we’ve got Google on our side anyway. That can’t be a bad thing.

Hopefully the many improvements for Firefox 1.5 will make it even more attractive and spreadable.

I also can’t wait to see what they’ll conjure up at SpreadFirefox.com for us to do. Hopefully it’ll be something a little more useful than just taking a picture and uploading it… I want to be used! Let us pay for a TV-commercial, or collect money for some really wild and media-attractingly crazy event! The NYT ad was paid for by 10,000 people. SpreadFirefox now has more than 100,000 members. I do hope they don’t let the 1.5 launch just slip by, but I’ve got a hunch they have something up their sleve.

The Inquirer’s Take On Microsoft and Firefox

Haha. This is so funny and, unfortunately for Microsoft, so true.

Tags: Mozilla
Posted in Mozilla Firefox | Comments Off on The Inquirer’s Take On Microsoft and Firefox

While we’re on the subject of Firefox bugs I thought I would post a list of my favourites. Well, calling them favourites is maybe a bit off, since I can’t wait to see them nuked off the face of bugzilla:

The above two are what I would call the most important Gecko bugs right now. They both do their part for preventing truly scalable website design. For instance, if the latter one was fixed, website designers would be much more inclined to specify image sizes in em units and the images would resize beautifully with the rest of the content.

Then there are a few other bugs which also would be nice to have fixed. These are definately lower prioroty though, IMO:

Then of course, there is the Acid 2 bug, which is being worked on as we speak – and may well be fixed for Firefox 2.0.