Trees and Snow in Kronskogen

The other day, Mikael Barani showed me some photos he’d taken in Kronskogen. That inspired me to go outside with my camera the same day. But the weather wasn’t really that good for shooting in the woods.

Today though, with a nice coat of frost, the woods sounded like a better deal. So I had a go at catching the silence and cold.

I stuck to using my 50mm and my 10-20mm. I did try a hand-held HDR which came out ok, but I didn’t like it as much as the rest of the photos so now it resides in my Windows recycling bin.

By the way, two of these shots are total rip-offs of the ones he showed me. 🙂

Since the photos were fairly uninteresting straight from the camera I tweaked the contrast and added a split toning effect. (When a photographer says tweaked he means mashed it so hard it looked ridiculous and then brought it back down a bit.)

Posted in Eskilstuna, photography | Comments Off on Trees and Snow in Kronskogen

My colleague inspired me to go out and shoot in the snow, so I headed out today even though the weather was rather dull and overcast. But dull can also make decent photos, if you use the contrast slider a lot. 🙂 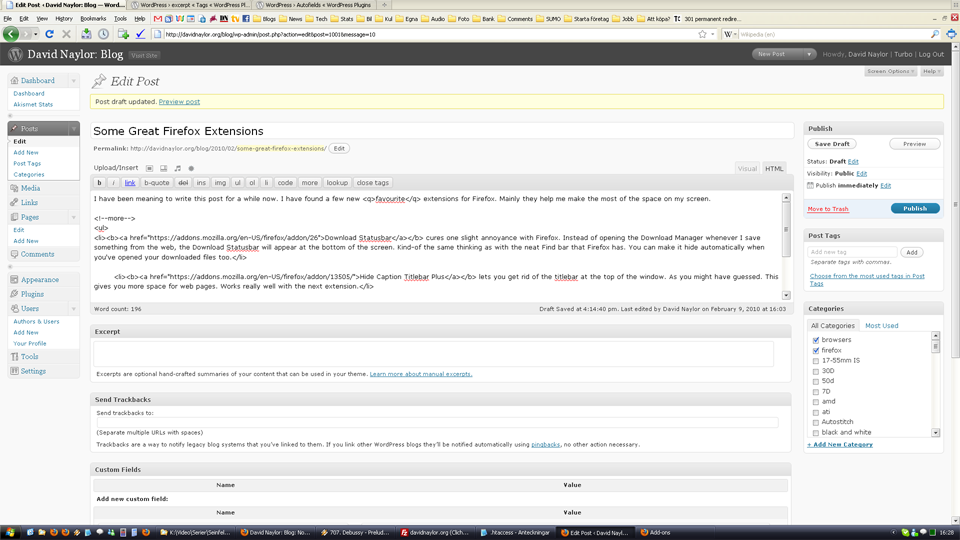 I have now managed to migrate my blog content and design to WordPress!

There were quite a few hoops to jump through, but I’ve finally got to the stage where I feel I can invite you over to the new version. In fact, if you’re reading this in an RSS reader you should be automatically redirected to the new version of the blog if you click through.

I believe I have managed to set things up so that all incoming links should redirect to the posts imported into WordPress. (Which use a different URL scheme than Blogger.)

Here is the link to the new RSS feed.

Should you find any weirdness, I’d be very grateful if you let me know by leaving a comment. Thanks!

Blogger have just informed me that they are getting rid of the possibility to publish via FTP to your own domain/server.

I should be angry, but I’m kind of happy because this is just the kind of push I need to move to some better blogging service or software.

Just like everyone else, I’ve decided to go with WordPress. I’ve got it up and running, and I have managed to import all my old posts.

The next thing to do is to migrate my design to the new system, and when that is done I’ll implement automatic redirecting from all my old posts.

Obviously I hope to do the switch with as little disruption as possible, but any subscibers I have might need to re-subscribe to a new feed. I’ll let you know when I’m done.

Posted in Uncategorized | Comments Off on Moving from Blogger to WordPress