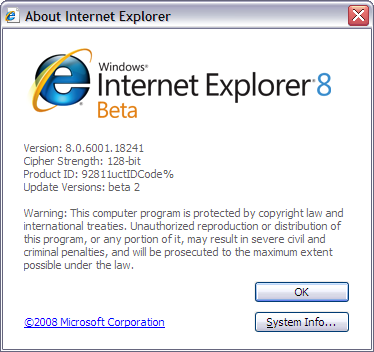 I just downloaded IE8 beta 2 and gave it a quick spin. Here are my first impressions, starting with the good:

Then a few good things where IE8 has caught up with the competition:

The bad is that my main reasons to avoid Internet Explorer are still there:

It remains to be seen if they can improve the tab-opening performance enough for the final release. I’m guessing they won’t. (Enough in this case would be as fast as Firefox 3, which on my 3200+ AMD opens tabs instantly.)