My New Toy: the Cowon/iAudio D2

(This little review ended up so long I decided to add some rather un-bloggish section headers.)

On Thursday the 19th I finally got my first ever DAP. The Cowon D2 (4 GB). I thought I was going to get it on Monday, but it was delayed three days in the post. That’s the Swedish postal service for you.

Strictly speaking though, this is a PMP, not a DAP, since it plays videos as well as audio.

Previously, Cowon have branded their DAPs as iAudio this or that, but for some reason they’ve dropped the iAudio name from their newer players. (The A3, D2 and Q5.) If they are trying to reduce consumer confusion by removing the semi-brand iAudio name, they aren’t doing to well. The current situation is much more confusing. Google says the D2 is referred to as the iAudio D2 in one out of three times.

My main reasons for getting the D2:

Then there are a few other useful features that might come in handy:

Then a few gripes:

Overall, the D2 feels very well built and sturdy. You can hear how nice it feels (yes, you can hear it!) roughly one minute into this pretty good video review when the reviewer pushes it around on a table surface. As usual, though, on these kinds of things, the USB/charger connections are covered by a plastic lid which doesn’t feel… umm… indestructible. I guess the player would work fine even if that lid were to break off.

Since I live about 320 kilometres from my family and girlfriend, I spend quite a few hours on the train every month. That’s where I’ll be using the video capability of this thing. I’ll simply load it up with a few episodes of whatever I happen to be watching, or possibly a film that I’ve recorded from TV recently, and watch on the go. That should reduce the boringness of travelling. I’ll just have to try to not laugh too loudly while watching Seinfeld. 🙂

I will use my D2 with my Koss PortaPro headphones, which are very light and travel friendly while sounding great.

One great aspect of all Cowon/iAudio players is that you can adjust the sound in about a million ways, using a real equalizer, bass booster and various effects. For those of you who have a Cowon player, here are my settings:

Album art is another of the D2’s nice touches. For each music folder you can simply add a picture of the album cover, call it cover.jpg and it will be displayed when playing any of the songs in the folder. See the photo below.

The easiest way to get your D2 set up with album art is to simply do Google image searches for each album and save decent-looking images in the corresponding folders. It takes a while, but it’s well worth it if you ask me. (And hey, you’re reading my blog.) The pictures should be at least 92 by 92 pixels. If they’re bigger, they will be automatically downsized by the D2.

I also like the fact that Cowon are constantly improving the firmware for their players. It makes you feel that they care for you even after they’ve got your money, which is the kind of thing that makes you want to come back to a brand in the future. Right now it’s been a few weeks since they released 2.41, so there should be a new version out soon. 🙂

When I got my D2, it had the 2.21 firmware installed, so I went through the rather tedious upgrade process to get version 2.41. About halfway through the installation I couldn’t get it to switch on, so I panicked for a little while, thinking I had lost it for ever. However, after a few more tries it started and I could finish the installation. That’s pretty much the only software glitch I’ve seen so far.

The bundled computer software, JetAudio, is surprisingly good considering it’s bundled. So far I’ve only really used it for converting videos to the right size, though. What I liked was the surprising number of options for getting the video conversion just right. For instance, it’s possible to select just part of a video file for downsizing.

Finally, if you end up a Cowon (or iAudio?) owner, you should know about the iAudiophile.net forums. There you’ll find answers to pretty much anything you could want to know about the Cowon DAPs and PMPs.

Tags: review
Posted in Uncategorized | Comments Off on My New Toy: the Cowon/iAudio D2

Ask a silly question, get a silly answer. (Click for the fun.) 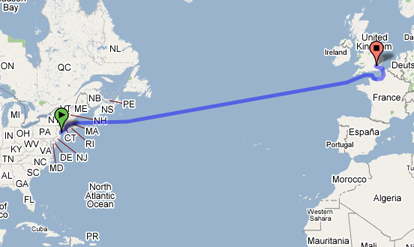