The most annoying bug of Windows XP and 2000 (?) has to be this: When you move a shortcut to a new folder on the startmenu it will NOT stay where you let go of it. It will ALWAYS jump down to the end. You then have to move it again to the wanted position.

This is with XP, fully patched with SP2 and the lot. Microsoft, how hard can it be? 11 years after launching Windows 95 and this kind of thing still* doesn’t work?

*) I’m not 100% sure that this bug always has been present. If you have any further knowledge about the older Windows versions, please leave a comment.

Just found my favourite extension! Googlepedia. This is a simple yet wonderful plugin which gives you a relevant Wikipedia article alongside your Google search results. Something like this: 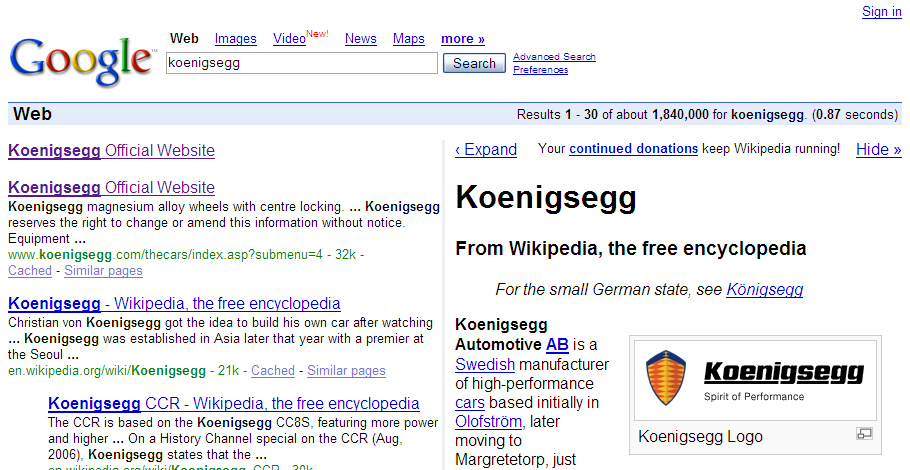 I’m speachless! Googlepedia, where have you been all my life? 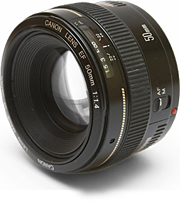 I’ve been wanting the EF 50 1.4 for a long time, since it opens new opportunities in low light. On the 30D (with the 1.6x crop making it equivalent of 80 mm focal length with 35mm film) it also works great as a portrait lens.

With the 70-300 IS I’ll feel more comfortable using the 300 mm end, since the 70-300 IS is very sharp throughout the zoom range, as opposed to the EF 75-300mm that I owned before. Both sharpness and chromatic aberrations when shooting at 300 mm are much better/less severe with the new lens, thanks to a UD lens element (made with Ultra-low Dispersion glass).

Then, of course, the 70-300 also has image stabilizing which can truly work wonders in low light. Or what can you say when you get a sharp picture at the equivalent of 112 mm with a shutter speed of 1/8 sec?

I’ll be adding some images I took with the 70-300 on Monday to my Photography website.

Edit: I have now added two new galleries at my photography website, Now and Then.

Edit: Since this post was made I have re-structured my gallery and the Now & Then galleries don’t exist any more.

Microsoft never cease to amaze me with their stupidity.

Windows Live Messenger opens all links and web searches in the default browser (as opposed to previous versions of MSN Messenger?), but still forces the user to use Internet Explorer when opening Hotmail. Why, Microsoft, why?

You would have thought that Microsoft, having devised the scheme of default applications in Windows, would respect them. What’s the #Â¤%&Â§! point of allowing the Windows user to specify a default web browser if not even Microsoft’s own programs respect the users choice?

Come on Microsoft – grow up and get with the times! Even my non-techie friends understand enough to realize that you’re being really stupid here.

And while I’m at it – it’s just so 2005 to have an advert at the bottom of Windows Live Messenger and every chat window.

Right now I have not one single reason why I should use Windows Live Messenger instead of Google Talk. Let’s see … Google Talk …

Why don’t you get it too?

The shop I work at now has the Sony Alpha 100 (DSLR-A100) in stock. After having just felt it briefly, here are some thoughts:

1) However, having the stabilizer in the lens has one apparent advantage: You can see the effect, and thus it is easier to make the most of the motion dampening. Try a Canon lens with IS, and you’ll see what I mean.

2) This was one of the first things that struck me – the shutter release is in the wrong place!

All in all it seems a fairly good camera. Personally, I still don’t regret getting the 30D, which for 40% more money feels much more robust. I think it was worth it. Actually, it’s basically just the look and feel of the 30D that makes me prefer it over the Alpha 100. Not everone else will feel the same, of course. If I could have had one of the Alpha 100’s features on my 30D it would have been the anti-shake.

I’ve just noticed that Prisjakt.nu, a commercial Swedish website, is using -moz-border-radius to make their design look a little more 21st century. That’s the first time I’ve seen that on a major website. 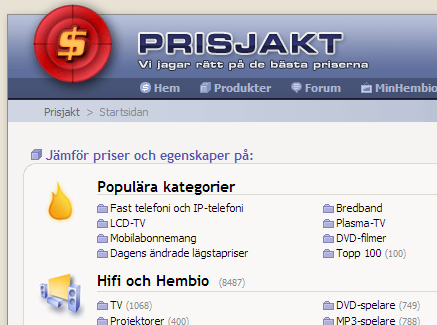 However, it doesn’t look like they’re using the to-be-standardized border-radius… But then again, I guess that doesn’t have any effect in any browser as of today… Or does Safari understand border-radius?

The website is similar to Froogle et al.; it compares prices from different shops for whatever product you may be interested in.