There have been some great improvements to the Firefox 2 Beta nightlies lately. I’ve already told you about the improvement made to the tab overflow solution.

Yesterday the keyword handling was improved. Previously, if you typed some keywords into the URL-bar, Firefox would do a Google “I’m feeling lucky” search. Now it will do a Google “Browse By Name” search, which means that if there isn’t a clear top match, you will get to the Google search results instead. This is a great example of a good feature which just works without getting in the way.

They’ve also added a keyboard shortcut for “Undo Close Tab”, Ctrl+Shift+T. This was necessary, since that functionality previously wasn’t reachable if you had closed all tabs but one. (You had to open a new tab, and then right-click the tab area.) However, I can’t see that the keyboard shortcut is listed anywhere… It has to be if people are to find out about it. I also just realized there is a list of recently closed tabs on the History menu, which is very usable.

Another improvement, which it seems I can’t verify, is that the textbox spell checking now shouldn’t underline URLs. While writing this post, though, Firefox still seems to be doing just that.

Then, of course, there is the yet-to-come Visual Refresh, which you already know about.

The Options window is getting a makeover (again), to improve the categorization, and to better include the new options for Anti-Phishing. For instance, the Tabs tab has been moved to position 2, since it deals with one of Firefox’s main features. The networking options has been moved to Advanced, and the download location selector has been moved to tab number 1, named Main (previously General). Also, many prefs are renamed with easier-to-understand labels.

A small detail to finish off with: The close button has been removed if there is only one tab open (and you have chosen to not hide the tab bar).

As I’ve already said, many times: Firefox 2 will be a very nice update from 1.5!

After redesigning my photography website today, I noticed that Opera 9 has a fairly serious rendering bug:

I don’t understand what I’ve done to make it do that… The CSS for H1 is here:

I’ve just put together a new gallery at my photography website, Drops. Close-ups of rain-drops on plants, all taken with my EF 75-300mm 1:4-5.6 lens and the 500D screw-on close-up lens, at our summer cottage in June.

Posted in photography, Uncategorized | Comments Off on New Gallery: Drops I’ve just opened my new photography web site, over at http://davidnaylor.org/photography/. Instead of grouping the photos into subject categories (which I did before), I have now made smaller galleries with only four photographs each, grouped in much more arbitrary ways. 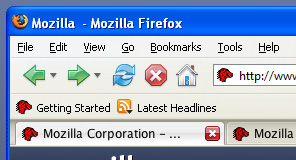