Yesterday we had a thunderstorm, so I decided to try and catch a flash of lightning with my new 30D. I had been thinking of this previously, so I already had a plan:

Having the low ISO and small aperture made each exposure ~0.8 seconds, which was almost enough for the CF card to keep up. (A Sandisk 2GB Ultra II, if you’re wondering.) I later adjusted the camera to over-expose by 2/3 of a stop to get even longer exposures, ~1.3 secs. At this rate the JPEGs were written to the card as fast as they were being shot.

Having the camera set in drive mode with long shutter speeds meant that the camera was taking in light perhaps 2/3 of the time, or more. That means that the chances of a lightning strike ending up in a picture were fairly large.

About 20 minutes later I had 1,000 pictures to sift through. I caught four flashes, but none of the pictures are very awe-invoking. In fact, the last one you can barely see at all… 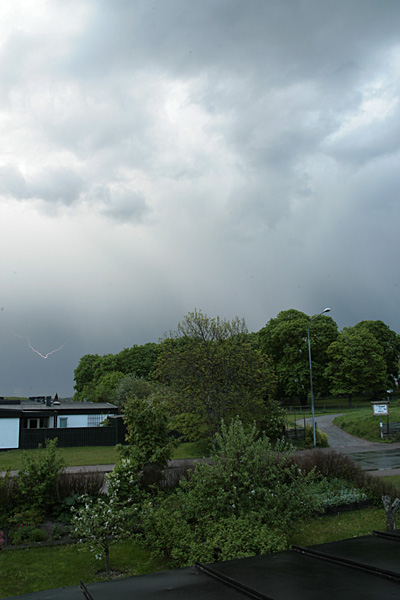 Well, this one is very small, but still one of the clearer sparks. 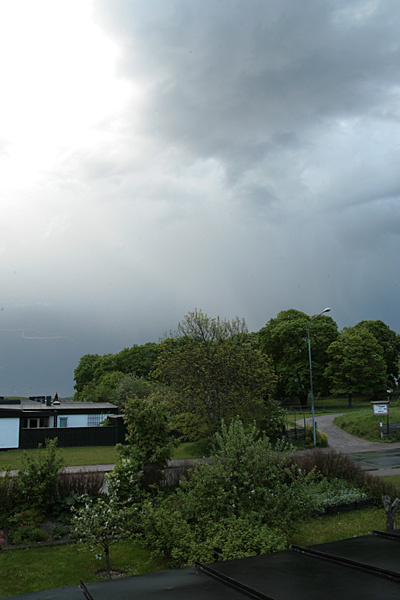 A very weak one. Didn’t find it when looking through the photos the first time… 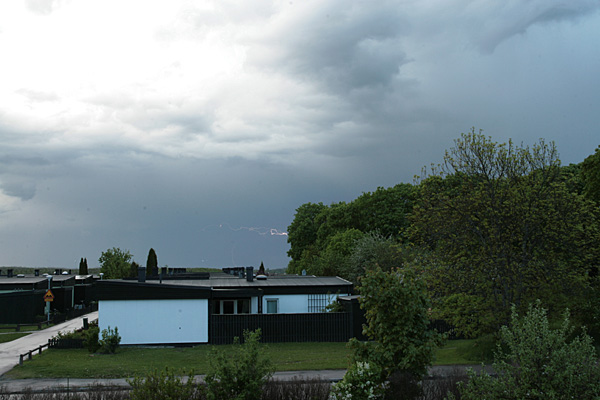 The best one. Click and zoom into this one, it’s quite nice up close. 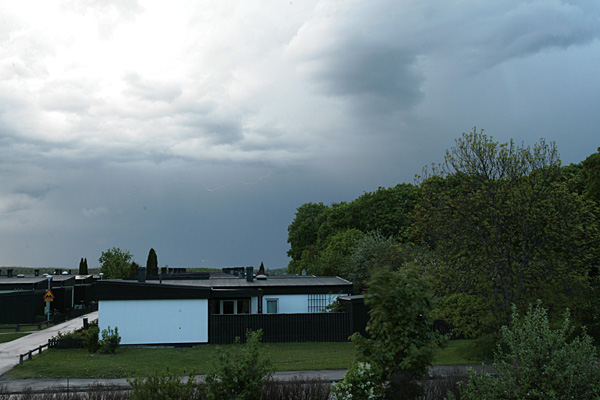 This one is very weak, but if you look at the high-res version you can see that it extends quite far over to the left. Pretty cool.

Obviously, these shots are pretty lousy as lightning photos go… But I had a good time anyway, and I now know that the technique works fairly well. Although, having used up 1% of my shutter’s expected life-span I wish I’d got some better shots… 🙂

If you’ve got a digital SLR I suggest you try this sometime. (Perhaps when you’ve got a thunderstorm.) Do stand somewhere safe though.

An ND filter would allow you to get even longer exposures, so as to reduce the number of frames somewhat and increase the chances of catching a flash on film … um … CMOS. It might also allow you to use a slightly larger aperture, to reduce visible sensor dust.

It would probably have been easier to do this if it had been a little darker, too. A darker scene would also have made for more impressive-looking shots I guess.

I did notice, after 700 odd shots, that the shutter had slowed noticeably. The exposures were still 1.3 secs, so the write speed shouldn’t have been the problem. In fact, the buffer was empty, so write speed can’t have been the problem. So I’m not sure why the camera did this. It was perhaps getting over-heated or something. So if you do try this, keep an eye on your camera and abort the experiment if you see smoke coming out from between the seals or the lens mount… 🙂