I have made a few tweaks to my blog design – hopefully to the better:

Update: Just realized I needed to increase the line height of lists, too. 🙂

Posted in Uncategorized | Comments Off on Some Changes

Winamp’s Equalizer Degrades the Sound of Your MP3s

Over in this thread at Hydrogen Audio it has been established that Winamp’s equalizer, when switched on and tweaked, degrades any MP3s you play. This is because Winamp by default uses some EQ method for MP3s which (if I’ve understood things correctly) uses less resources, and affects different frequency ranges.

The difference is pretty obvious: Compare a good quality (220kbps +) MP3 to it’s original Wave file. If you have the higher bands on the EQ turned up a few notches, the MP3 will sound much poorer than the Wave – even though the sound information contained in the MP3 at this quality level should be pretty much indistinguishable from the original.

Thankfully, there is a simple solution to this problem. If you want your MP3s to be played using the same equalizer method as Waves, Oggs, FLACs, etc just click…

Select the Nullsoft MPEG… input plugin and click [Configure]. Select the [Decoder] tab and uncheck [Fast Layer 3 EQ]. That’s it! Enjoy your MP3s as if they were Oggs! 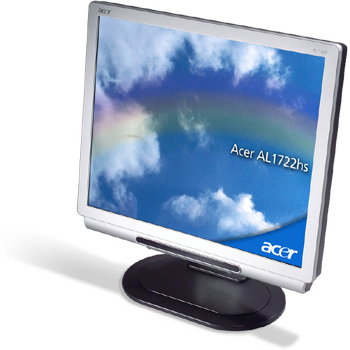 Tags: screen
Posted in Uncategorized | Comments Off on My New Screen: Acer AL1722hs

Is the iAudio X5 the DAP of My Dreams?

Well, it’s pretty close at least. It has good, solid Ogg support – at least from what I’ve read over at Hydrogen Audio. It has a nice colour screen. It has radio. It has 20 GB. It can record (to mp3) on-the-fly, with a small built-in microphone, from the radio and from the line-in connection. It doubles as a portable drive. And it can show video and photos. So what does this beauty cost? Well, here in Sweden the best price seems to be SEK 2,790 + about 99 for delivery, which would equal about $414. It must sound pricy to those who live in the US, but I guess electronics in general are more expensive here. 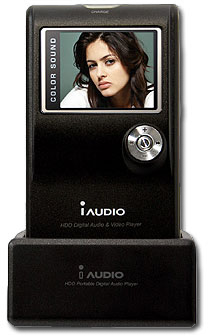 The only problem now is – when would I use it? I don’t tend to use the portable players I have all that often. Also, I’ve just spent ~$400 on a shiny new screen.

Posted in Uncategorized | Comments Off on Is the iAudio X5 the DAP of My Dreams?

I’ve been wanting these for ages (and they may have been around for ages too) but I didn’t find them until now: Audio Plugins for Nero which let you drag and drop Ogg Vorbis files (and others, including FLAC & MP4/AAC) straight to your Audio CD compilation.

Posted in Uncategorized | Comments Off on Great Audio Plugins For Nero

Ahh… Finally – No More Auto-Expanding Folders on This Computer

This has been bugging me for ages: The folders in Windows XP auto-expand when you click on them in the folder tree of Windows Explorer. Finally, thanks to this page, I have learnt how to disable them.

The pref isn’t exactly intuitively labeled. They call it Display Simple Folder View, which is really several prefs in one. Apart from the auto-expanding it also sets the visual style of the folder tree – hiding the branches if enabled: 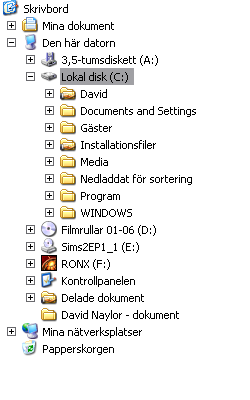 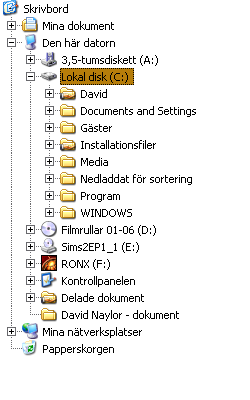 How’s that for a technical heading?

For those who are not really into ABX-ing: It’s the art of comparing a compressed sound file with it’s uncompressed original. The point is to find out for yourself at what quality level you have to set your MP3 or OGG encoder to not be able to tell the compressed song from the original. Today I encoded a certain song (Green Day – Wake Me Up When September Ends) with the V1 quality setting of the Lame MP3 encoder, which for this song gave an average of 241 kbps.

That means I must have pretty decent hearing after all. Which is strange, because it was my hearing which got me out of the involuntary Swedish military service.

Fini Alring has a great demo of CSS3 columns. It’s making me drool. For those who don’t have Firefox 1.5 beta there are screenshots.

iTunes and the others have a thing or two to learn from AllOfMP3.com.

You fill your AllOfMP3 account balance with a minimum 10 USD before you can start downloading. Then you order your songs, at a cost of $0.02 per MB. Thus, how expensive your song turns out depends on what encoding and quality you choose: 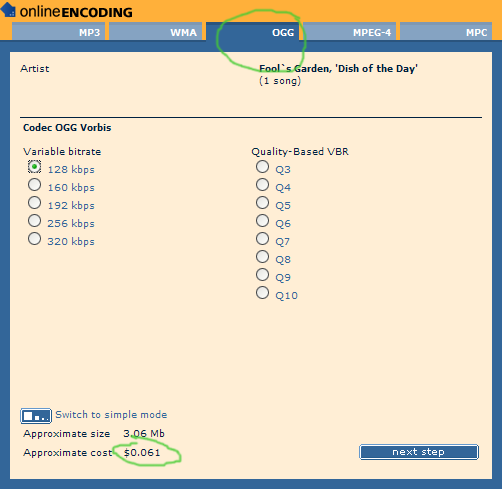 I tend to choose ogg vorbis at ~128 kbps, since I only know of one part of one song that I can tell from the uncompressed original at that bitrate – and I have to concentrate like mad to do so… That means most songs cost about $0.06–0.08. This really gets you into a shopping mood 🙂

The songs are encoded after you order them, and you receive an (optional) email when they’re done. All songs I’ve ordered so far have been ready within 30 mins. Then you just log back in and get them. Actually, I think I’ll turn the email notification off – you get one email for each track if you order a whole album… So far I think that’s about the only negative thing I can think of about this music shop. Check it out.

Posted in Uncategorized | Comments Off on AllOfMP3 Shows The Way Forward