The Power Of BitTorrent 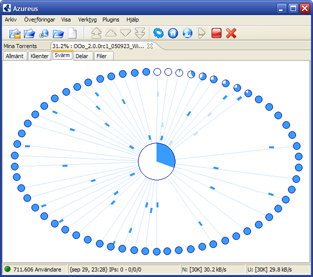 I guess I wasn’t the only one downloading OpenOffice 2 Release Candidate 1. 🙂

Posted in Uncategorized | Comments Off on The Power Of BitTorrent

I was trying to use the spell-checker of OpenOffice 2 beta 2, with a few additional language dictionaries. Here are the problems:

All in all, a pretty lousy experience. Or did I just miss something?

Edit: Hopefully, but unlikely, this will be fixed before 2.0 final.

PimpZilla – The Coolest Firefox Theme Ever?

PimpZilla must be the coolest Firefox theme ever made. (Screenshot) It has it all: fake pink fur, leopard skin and a bling bling factor of about 12 (out of 10). Unfortunately though, it isn’t yet compatible with the soon-to-be Firefox 1.5. Can’t wait.

Tags: Mozilla
Posted in Mozilla Firefox | Comments Off on PimpZilla – The Coolest Firefox Theme Ever?

Hans G. Lehmann has done it again. This time it’s the Volvo C30 he has caught on film. The spyshots are pretty clear, even if the car is camouflaged from the door pillars and back.

The following is a computer rendering (?) of what the C30 probably will look like, by Motor Forecast: 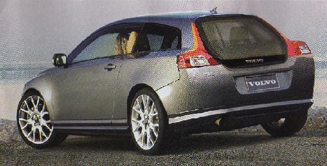 Not bad, if the real car turns out to be anything like this. (Judging from the tease Volvo released previously it probably will. Can’t find a link – sorry.)

It’s great to see Volvo expanding their model range, in both directions. (Even if it was a while since the XC90 was launched.) I just hope they can keep up with updating all these models at the required pace. The C30 is definately something I could consider as a first car, if I got a nice job. 😉 The C30 should also help them reach their target of 600,000 cars sold annually.

Posted in cars, Volvo | Comments Off on Spyshots Of Upcoming Volvo C30

Some Tracks I Put Together Way Back

Some years back, when i was about 15 I think, I was playing around with FastTracker, an old song-making program. It was my friend Mattias Eklöf who first got me interrested in music-making on the computer. I remember we made a techno version jingle bells. Or maybe it was a remix of a whole bunch of xmas songs.

I thought I’d dig them out and share them. Unfortunately I couldn’t find the xmas mix, but I found a bunch of tracks I made on my own. They’re pretty funny anyway. The second track is an unfinished remix of an old classical piece. Can anyone work out which one? (It’s maybe obvious – hard for me to tell.)

The files are encoded as quality 4 ogg vorbis, which equals about 128 kbps.

After having played about with a three-column CSS layout, I decided to use the design for my blog.

So, here’s the result! There may be some minor polishing work left to do, but I think I’m mostly done.

I used Firefox for testing while I was building the design. Then I checked the result in Opera (no problems) and lastly in Internet Explorer. I made one small adjustment to the CSS for IE, in order to make links the right colour. (It seems IE doesn’t understand the inherit value for links.) Something I decided not to do for IE was swap the max-width property (which IE doesn’t understand) of the posts for the width property. Doing so would break the scalability of the design. I’d rather make it clear to users of Internet Explorer that they’re using an outdated browser…

So, If you’re reading this in Internet Explorer, and wondering what this design really should look like – try Firefox instead. You’d be doing yourself, me, and every single web designer in the whole world a huge favour.

I also added a favicon for anyone who may have bookmarked the site.

Update: Just for the heck of it I made a semi-transparent white PNG image for the background of links when hovered. That way I don’t need to find different suitable hover colours for the different background colours. Also, if I want to change the colour-scheme later on it will be much easier.

Hah. I was just updating my installation of Netscape 8, and during the download and installation process I was shown a nice little flash (?) tutorial. Here’s the funny bit: 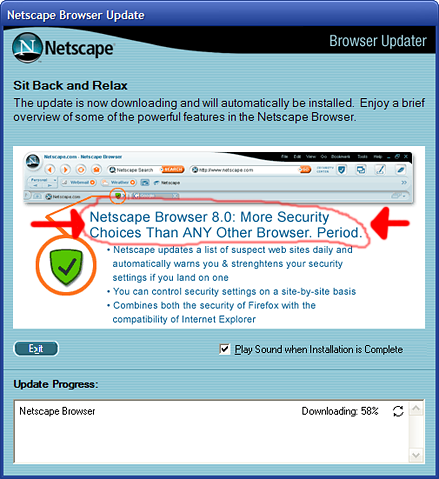 Well, I’m not accusing them of lying. But I think they’ve missed this one tiny point: The user doesn’t want to have millions of security choices.

Netscape 8 definately is a mess when it comes preferences and suchlike. I was utterly astounded, just now, when I was poking around the toolbars a bit.

Now, I know this is no news to anyone who’s ever read a write-up of Netscape 8, but i just thought it was so funny I had to post it…

Posted in Uncategorized | Comments Off on Way To Go Netscape!

As I was hoping a while back, Opera (the desktop version) has now become real freeware, without ads. This is truly great news for the web.

Now, hopefully, the Firefox and Opera communities can work united (sort-of, at least) towards the main target: to bring down the marketshare of that old, stinking, vile pile of a browser known as Internet Explorer.

Now, some may think

Oh, what does it matter, now that IE7 is just around the corner? Microsoft are working towards standards compliance now.

And here’s why it matters: We still don’t know if Microsoft’s intentions with Internet Explorer 7 really are good. In fact, they most likely aren’t – simply because they have no reason to. They do seem to be caring at the moment, but they did so about five years ago as well… It’s merely an overgrown PR stunt. If we ever let Internet Explorer’s market share grow as high as it was a year or two ago (~95%), I think we will find out the hard way that Microsoft’s aim was, once again: domination and (most importantly) lock-in. 8-|

So, if we (i.e. us Firefox and Opera fans) make sure that our favourite browsers always have a healthy market share, of at least 10% each (and hopefully a lot more), I think we can keep this Internet thing moving. If we want to be able to use any CSS3 stuff before we die we had better give it our best try.

Playing Around With CSS – A Scalable Three-Column Layout

After having read the first few chapters of Lie and Bos’s book Cascading Style Sheets (3rd ed.) I was inspired to play around a bit with some of the nice things available in CSS.

Unfortunately many of these nice CSS features (such as the sibling or adjacent selector – me wants it very much!) don’t work at all in Internet Explorer 6.

Anyway, I put together a three-column layout based entirely on CSS, which a) is completely based on the users default font size and b) makes use of the full screen width. Actually, to my surprise, the basic layout seems to work quite OK even in rusty old IE6. Here’s what I’ve put together so far. Feel free to use all or parts of it if you should want to.

Can’t wait ’til the standards compliant browsers have a more substantial market share, so we can start using adjacent/sibling selectors seriously. They are truly wonderful for making good-looking typography.

Comments on this design, or other advanced CSS stuff, are more than welcome.

Oh. And one other thing I’m looking forward to play with is CSS3 colours, which will be allowed to be semi-transparent: colours with an opacity value. Sounds pretty neat, eh? Can only imagine it will be totally so.

Update 2005-09-26: As you may have noticed, I decided to use the three-column layout I was playing with here as the base for my new blog design…

Tags: CSS
Posted in browsers, Internet Explorer, web design | Comments Off on Playing Around With CSS – A Scalable Three-Column Layout

AJAX Can Be Funny

This comic strip is really funny. And I’m such a geek I can hardly believe it.

Tags: humour
Posted in Uncategorized | Comments Off on AJAX Can Be Funny

Volvo have just released a press release with details of the stereos in the upcoming Volvo C70. The interesting stuff, of course, is the most powerful system and its specs.

Volvo are hoping to sell about 16,000 new C70s per year. I doubt they will have any problem reaching that target.

Posted in cars, Volvo | Comments Off on Volvo C70 Gets Mighty Stereos

Ye-haa! The Software Update in Firefox now features great, wonderful, slick binary patching. You can update from one version to another by just downloading a few hundred kB or so. Just check this screenshot sequence: 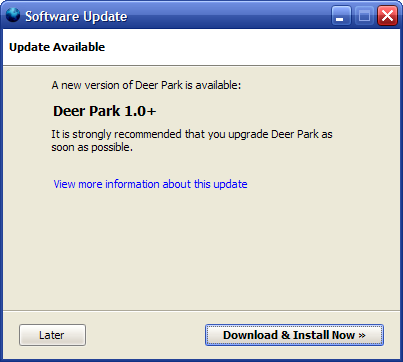 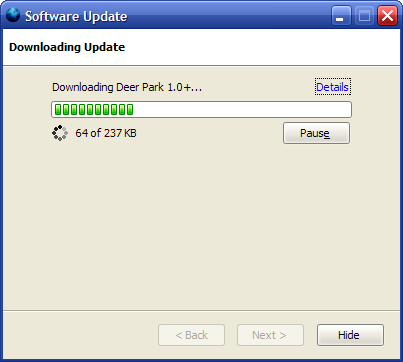 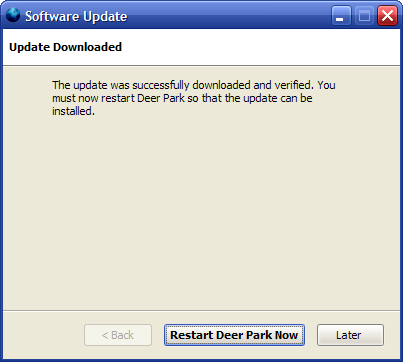 This, together with the setting to download and install updates automatically, makes it possible for me (and these other guys) to install Firefox for friends and other acquaintances without having to follow up with update installations.

I just realized. Few things are as cool and geeky, at the same time, as Firefox is. Can anyone think of any other examples of things that are cool and geeky?

Tags: Mozilla
Posted in Mozilla Firefox | Comments Off on Firefox – Cool and Geeky?