I guess it all started back in 1998 when we were to make our own websites at school. (I was 15 at the time.) To make them, we had Netscape Composer – version 4 if I remember correctly.

Somehow I got hooked on this whole webpage making thing. I guess I had always enjoyed making nicely laid out documents with word processors, ever since I was a tiny kid. The ability to produce a dynamic document with colours really appealed to me, since any paper documents I made could only be printed on our (black and white) laser.

Naturally, my first website was an incredible strain to the viewers eyes. What, with animated flags and spinning e-mail icons, frantically psychedelic backgrounds, and an over-all colour theme that made your stomach churn. This was presumably making up for all the years of black and white only. Sadly, I can’t seem to find a copy of the old gem. Maybe it’s for the best.

I can’t remember if we were encouraged by the teachers to start poking with the HTML code in notepad or if I just decided to have a look anyway. Anyway – fairly soon I felt more comfortable editing the HTML directly than using Composer. (Which, looking back, maybe wasn’t so strange…)

After about a year or so I made a completely new (personal) website. This time around it was a little more pleasant and usable. Below is a screenshot of the website, as seen with an authentic, 1990’s web browser: 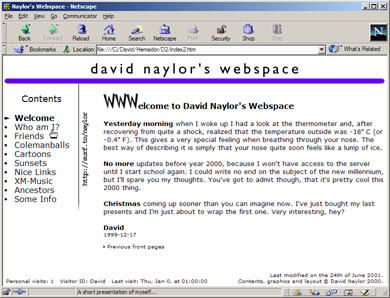 Obviously, all of this was in the middle of the raging browser wars. Some of my class mates thought Internet Explorer was better, while I for some reason always preferred Netscape. (At this time I had no idea about which browser was most standards compliant – all I knew was that they weren’t compatible, and special tweaking of the code was required to serve both browsers.) I guess I preferred Netscape because I was used to it, and Microsoft was the big bad company. (This impression was mostly because their Word had more or less already out-competed Word Perfect.)

I remember reading in a book at the library, about HTML and suchlike, that the upcoming, version 6 browsers could turn out to be standards compliant – as opposed to all the previous versions. Heh. If only both the version 6 browsers had strived for that goal…

I saw the Internet Explorer versions come and go. I was waiting for Netscape to release their next version (nr 5, which became nr 6). This turned out to be a very long wait, as we all know. I kept up to date with the browser world by watching browsers.com, a CNet website – back in the days when it actually had some kind of content. (Nowadays it’s barely a collection of links, and a list of the most popular browser downloads.) 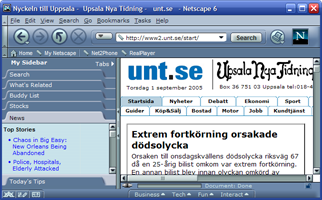 Finally Netscape 6.0 was released (November 2000), but to pretty chilly reviews. Buggy and slow was the general verdict. If I remember correctly I waited until version 6.2 before I installed it on my dad’s computer. A year-and-a-half later (in June 2002) I read on browsers.com that Mozilla 1.0 had been released. I hadn’t heard much about Mozilla before this, so I was rather curious. I learnt that this was what Netscape 6 had been built from. I liked the idea of always having the latest and greatest web browser, so I chose Mozilla over Netscape.

Tabs, of course, made for love at first sight – a great feature for someone like me who liked surfing a lot. They were also very handy when on a dial-up modem, which I was at the time – just open the interesting pages in a bunch of new tabs and disconnect before you start reading them.

To begin with, for news on Mozilla, I mostly just checked mozilla.org. With time though, I started reading MozillaZine more and more often to get the nitty gritty details. I faithfully downloaded each release, always checking the What’s New page to see which great features had been added. Here are some of the features I remember being particularly pleased about when they were introduced:

By now I was definately a Mozilla addict. Why should I use anything else? Mozilla was the best. Or was it?

MozillaZine was increasingly reporting about this Phoenix thing. At first I didn’t take too much notice. I had become used to the Mozilla Suite and felt comfortable using it. Then when Firebird 0.6 was released in May 2003, I gave it a try. There were some things I liked about it straight away, like the way it handled tabs (slightly differently compared to Mozilla Suite) and the separate search box. Other things that were added later on during the development, such as the Extension and Theme managers, were also very handy.

At first I missed having all the managers which Mozilla Suite had: Cookie Manager, Popup Manager, Form Manager, Image Manager, Password Manager. You name it. (Did I hear someone say control freak?) Pretty soon though, I realized that all those Managers weren’t really necessary. Firebird showed that it was possible to get along without them, thanks to carefully chosen default values of the preferences and smarter handling of, for instance, passwords.

Like most of us, I was pretty (positively) shocked and surprised when Firebird was renamed Firefox, at version 0.8, and given a new logo. They worked great together. Then, at version 0.9, the default (Windows) theme was changed too. While many people didn’t like the new theme, I always thought it was better than Qute (the previous theme), which I realized had some rather inconsistent icons. The new theme was more professional in style, and at the same time remaining colourful and XPish.

Firefox was, by the final release, a great browser for almost everyone. I could (and still can, of course) install it on all my acquaintances computers, and they would hardly have any problems using it even though they hadn’t touched anything other than IE for what – like, 5 years? If ever. Firefox is (obviously) also loads of fun for the more advanced computer user who can install extensions to their hearts content, such as (my favourites) Adblock and Minimize to tray. There is an extension out there for every single purpose you can think of. Is there anything you can’t do with a Firefox extension?

I was aware of Opera for quite some time – probably since around the time I first started keeping an eye on browsers.com. Since it was shareware, though, it didn’t really interest me. Opera released their first ad-supported version as early as December 2000 (version 5) but the banner put me off completely. (If I even tried it – I don’t remember.) It also had a somwhat awkward look, which I couldn’t quite get used to. The freeness, usability and, in fact, design of Mozilla Suite (and later Firefox), as well as their entirely open development process made me stay in the Mozilla camp.

Who knows what will happen the coming years. I know I will keep promoting Firefox, wherever I go. This became particularly easy when I was sent one of these, for… eh – I’m not really sure why I got it actually. They said something about me having given feedback. Hmm. Well, I suppose I have posted the odd post over at MozillaZine and Spread Firefox, if that’s what they meant. It can’t be for my bug reporting anyway: In three years I’ve only posted a single bug report. If they sent off a t-shirt for every bug report, they would have had to send out t-shirts worth more than $5,000,000. I know they are getting plenty of money from Google, but at that rate they must be raking in the cash by the ship loads. Anyway, whatever the reason, I’m not complaining. 🙂

I have a vision (like many others, I’m sure) that Firefox (and possibly Opera, if they decide to set it free) will help open up the web for good, and make it equally digestable on all operating systems. This, in turn, will allow more people to give Linux a serious try (myself included). Once Linux gains a nice chunk of the market, it will be very difficult for Microsoft to win people back. The difficulty for people lies in the actual switching. Once that’s done, I imagine sticking with a free operating system won’t exactly be a neck-breaker… Obviously though, Microsoft failing is not the point here. The point of this vision is that more people could (and would) use a large proportion of free software, thus saving heaps of cash – at the same time putting some much needed consumer pressure on Microsoft.