CSS – Designing for the Web 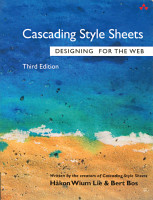 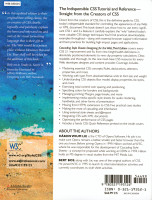 I was sent a copy for free in exchange for a user review over at amazon.com, which I feel is a great deal 🙂

This (the third) edition has been updated to fully cover the details of CSS 2.1. Without having read the book properly yet, it seems to be a very useful and complete guide and reference.

Beforehand I thought the book would only be a technical (code-centered) guide to CSS, but it turns out to contain many practical design tips as well. I would say it is useful for both beginners and advanced website designers. (I thought I knew basically what there was to know about CSS, but the book has already tought me several new and useful things.)

The book is split into logical sections, and for each CSS property discussed there are symbols indicating which browsers support the property in question.

Ok, this is getting a little out of hand here. I’ll try to think of something negative and add it to this post at a later date… 🙂

Tags: CSS, review
Posted in web design | Comments Off on CSS – Designing for the Web

If you don’t know what the Greasemonkey extension is, check it out.

The first one I find particularly useful – I have always found it annoying that you have to click twice when checking the results of Google’s image search.

I just read (among other things) over at Wired that Blake Ross is planning on making some videos of stunts to spread Firefox, in order to inspire the Spread Firefox community:

What is clear is that video is set to become a greater part of the strategy, with Blake Ross, Firefox’s lead architect, due to start publishing a weekly video diary of his own awareness drive.

It’s going to be much more shaky-camera, home-video quality than professional style, said Stanford University student Ross, 19. We’ve got a couple of humorous and edgy ideas planned — one has us making the rounds on the Stanford campus and spreading Firefox in a less-than-traditional way.

We want to inspire people to do the kinds of activities we’re going to film. Actually, I want to get into the film industry when I’m done with all this computer stuff, so I’ve done a fair amount of video production and editing over the last couple of years. I’m looking forward to it. It should be hilarious.

Cool. I’m looking forward to seeing what comes of this!

Is Bill Gates Not Getting It?

In an analysis by Tim Weber over at BBC News, regarding the competition Microsoft is currently having to deal with, Bill Gates is quoted: (on the subject of Firefox)

“I played around with it a bit, but it’s just another browser, and IE [Microsoft’s Internet Explorer] is better,” Mr Gates told me, and challenged my assertion that Firefox’s ‘market share’ is growing rapidly.

“So much software gets downloaded all the time, but do people actually use it?” he argued.

Just another browser, eh? IE is better is it? How come then that almost ten percent of the Internet’s users already ditched IE, counting only from the beginning of November? When (ex-) IE users realize how easy and efficient web surfing actually can be if you’re only using the right software, in my experience, they seldom look back.

The lowest Firefox usage figure at the moment is 5.69%. That figure, though, is now close to three months old, so we can easily reckon on Firefox being at a minimum figure of around 7% now. (We’ll soon find out – Web Side Story are due to release a new lot of numbers during this week.)

Update: It seems the page i linked to at WebSideStory has been removed. Maybe this is because of the imminent update.

Update 2: WebSideStory have now released the update, giving Firefox 6.75% of the US usage.

Posted in browsers, Internet Explorer, Mozilla Firefox | Comments Off on Is Bill Gates Not Getting It?

These. I’d say they are the first high-quality Firefox flash ads I’ve seen so far. Nothing previously has had that professional touch.

Tags: humour
Posted in Mozilla Firefox | Comments Off on Funny

There was a slight incident across the road from where I live… I’ve put some photos in a documentary section of my web gallery.

Posted in Uncategorized | Comments Off on Firebarn?

Firefox Downloads Without the Updates

Many people have lately pointed out that the Firefox download figure is inflated by people who download Firefox updates manually. (As opposed to updating from the options dialog within Firefox.)

Scott Kveton recently produced some rather sleek graphs which show the Firefox download progress since its launch back in November. This one in particular makes it possible to (fairly accurately) estimate the size of this claimed figure bloat: We simply compare the total area of the peaks around the dates of the 1.0.x releases with the area of the continuous flow of downloads prior to these releases. This estimation builds on one main assumption:

Looking at the download graph, this assumption doesn’t seem completely unrealistic, since the dl rate was pretty stable from the beginning of December until 1.0.1 was released in late February.

So, here are the results of my pixel counting:

Update: Asa D points out that Scott has in fact included the Firefox update downloads in these graphs. That means the numbers should be more like (1-0.264)x66,000,000, which is 48,6 million – pretty close to the 50 M number. That’s almost weird if you ask me – I’d have thought that more than 2-3 million people updated manually. Well, well…

Tags: Mozilla
Posted in Mozilla Firefox | Comments Off on Firefox Downloads Without the Updates

One of the main complaints about Firefox 1.0 has been that “you have to download the full installation when upgrading”. This has simply been due to the fact that Firefox had no system for such incremental patches. Well, it looks like Ben Goodger & co (Darin Fisher, specifically) have worked out a way to get incremental binary patching into Firefox for 1.1.

This is sweet music to my ears. I really hope they manage to make the update manager simple, intuitive and 100% functional. That way, I will have much less work keeping all my friends’ Firefoxes up-to-date. 🙂

Edit: Ben has also made some mockups of what the update manager will (should?) look like.