… to a nice, round 100 million Firefox downloads:

Posted in Mozilla Firefox | Comments Off on Halfway (almost)

It looks like Firefox 1.1 could get pretty solid support for SVG. This is good news, since there are some pretty cool things you can do with SVG.

Opera 8 already has support for SVG Tiny, but as I understand it, the support that has been checked into Firefox goes far beyond that. I may be wrong though, since I haven’t studied this very thoroughly.

Posted in Mozilla Firefox | Comments Off on SVG in Firefox 1.1?

David Hyatt has now fixed all the bugs in Safari which kept it from displaying the Acid2 test correctly. Now it just remains to be seen who does the first release which correctly renders the test. T’would surprise me though if it weren’t Apple.

If you haven’t yet tried the Abstract PC theme for Firefox, do so right away. It looks really professional and cool, both as in hot and low temperature.

Firefox 1.1 Gets Lightning Fast Back & Forward?

Opera has long had blazingly fast back and forward performance. Now it looks like we might get this in the upcoming v1.1 of Firefox too, judging from the amount of activity in bug 274784.

Tags: Mozilla
Posted in Mozilla Firefox | Comments Off on Firefox 1.1 Gets Lightning Fast Back & Forward?

I’ve been thinking for a very long time that I should put together a list of the free software I use. Free in the $0, no nags, no ads, we-want-you-to-use-it-for-free way. (If for no other reason, then at least so as to give them some well deserved Google juice.) So, here it is:

Edit: As I see it there are three levels of free:

Software classed as free-est can be counted as belonging to the free-er class too, since it to most users is simply free – $0, 0 nags.

OpenOffice.org Gets a New Look

I was just stopping by at OpenOffice.org, and saw that they have redesigned there website. Very nice!

Tags: OpenOffice
Posted in Uncategorized | Comments Off on OpenOffice.org Gets a New Look

Today I decided I’d have a go at installing SP2 for Windows XP. Having heard of the various problems people have been having with SP2, I made a system restore point before starting.

I wasn’t really expecting any problems, thinking “Oh, I’m sure those things won’t happen to my computer”… Well, it turned out, SP2 made my AMD 64 3200+ (relatively speaking now) extremely sluggish. Everything that had previously been quick as a flash (like raising and lowering windows) was now excruciatingly slow. Windows were slowly rolled out over the desktop instead of just being maximized. Also, it decided to paint vertical turquoise lines of various lengths all over the screen.

So, after about one minute I decided to get rid of it. Thankfully, that wasn’t too difficult. I first went to Add/Remove Programs and uninstalled it from there. After the computer had restarted, I did a system restore back to the point I had saved before starting the installation. Now things are back to normal. And, strangely, the bug which pushed me into trying SP2 in the first place seems to be fixed now. (Dragging shortcuts from submenus of the Start menu to the Start menu itself didn’t work.)

So far, I’ve stayed safe by just using Firefox for (basically) all my surfing, Thunderbird for email and by using the NAT firewall in our WLAN router. (Plus an up-to-date antivirus of course – AVG 7.) That has been enough security to prevent any spyware or adware from getting in. The worst intrusion I’ve had so far has been a few tracking cookies. (Most of which have got in through Internet Explorer, for some strange reason.) I guess I’ll just have to cope without SP2 in the future too.

MacDobe? (Would probably get them sued.) Adromedia? (Sounds like a galaxy.) AdMedia? (May send out unwanted signals.) Macrodobe perhaps? Any more suggestions?

Posted in Uncategorized | Comments Off on Macromedia + Adobe = ?

Opera have now officially released version 8 of their browser. I welcome the simplified default toolbar setup, which in version 7 could be pretty dauting even for a nerd like me.

Still, I find that Opera are a little inconsistent when they choose to always show the tab bar as default. The statusbar has long been set to auto-hide as default to maximize page space – why not hide the tab bar when only one tab is open? (I know there is a “show only when needed” option, I’m just wondering why it isn’t ticked as default.)

Also, the popup blocker in Opera 8 doesn’t seem as efficient as Firefox’s. When checking my website stats at my.statcounter.com I get a popup which I never get when using Firefox.

Update: Opera.com seems a little under the weather rigth now.

Safari to Win the Acid2 Race?

It’s looking more and more likely that Safari will be the winner of the race towards correct rendering of the Acid2 test. David Hyatt’s latest blog post shows that he only has about two errors/bugs left to fix before Safari crosses the finishing line. Although, it will still have to be made a public release to win in my eyes.

Posted in browsers | Comments Off on Safari to Win the Acid2 Race?

David Hyatt is making some speedy progress on fixing Acid2 rendering in Safari. He’s already worked out two of the bugs visible when using v1.2.

Safari 1.2 and 1.3 screenshots are available at The SeBlog.

Posted in browsers | Comments Off on Safari Trip

The latest browser stats from W3Schools have just arrived, and I had some fun making a graph: (I love making graphs) 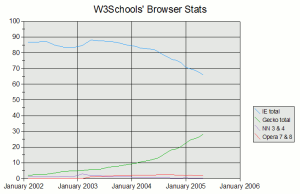 Remember, this only reflects what the tech spear-head internet users are browsing with.

Edit: Does anyone know what can have caused the pothole in the IE curve, back in 2002?

Posted in browsers, Internet Explorer | Comments Off on W3Schools Visualized

One Bit at a Time

Fascinating fact: (Well, sort-of) The soon-to-be 45,000,000 downloads of Firefox will equal about two-hunderd-and-fourteen and a half petabytes of data. Assuming that the downloads were evenly spread out, that equals a constant bitrate of 127 Mbps from the Mozilla mirrors put together. Putting it that way makes it sound less impressive. So I’ll just stick with the petabytes.

Anyway. All of this downloads counting reminds me of how McDonalds in the US keep (or kept?) saying “We have now sold X godzillion hamburgers”. Still, counting is fun.

Tags: Mozilla
Posted in Mozilla Firefox | Comments Off on One Bit at a Time

The Acid2 test is already having impact on some of the main browsers. David Hyatt, who is one of the developers behind Mac’s Safari, has just blogged that he has already fixed two bugs which cause Safari to not display the test correctly. More bugfixes are on the way, too. The Mozilla browsers have also joined the party – an Acid2 bug has been created in their bugtracking system, which is meant to make up a list of all the rendering bugs which make Firefox et al fail the test.

Let’s just hope these guys also decide to come and join the fun.

Some of you may already have noticed that comments which were posted here during the slashdotting today (and all previous comments too) have disappeared. That’s because I had installed the Haloscan comments and trackback system, and I uninstalled it today when I was re-doing the appearance of this blog. Apparently the system isn’t smart enough to save the comments.

I know the new look is a little boring and square, but it will do for now. I may get round to improving it a bit more later on.

Posted in Uncategorized | Comments Off on Avoid Haloscan

The counter over at Spread Firefox has been restored. As I write this, Firefox has been downloaded 44,317,787 times. That should probably equate to just over seven per cent web-wide usage according to WebSideStory. We’ll see. They should be updating their statistics soon.

Around the US in 80 GMaps

Found this enjoyable blog which collects links to Google Maps showing things worth seeing in the US.

So far, I think Rainbow Bridge (Utah) is the coolest sight. This will be even more fun when the Google Maps cover the whole world… (I just presume that’s what Google are working towards.)

Update: Corrected the title, replacing the World with the US.

About a month back, Håkon Lie announced the planned creation of a browser technology test page named Acid2. The Web Standards Project agreed to sponsor and host the effort. Now the Acid2 test has been launched, although it hasn’t yet been officially announced.

It’s quite an ingenious work of art actually. It consists of a complex HTML page which makes use of a whole number of advanced CSS2 features. If rendered correctly, the various divs and spans and what-nots will make up a happy yellow face.

This test page makes me realize that even though Opera and Firefox are pretty good, they still have some way to go before they fully implement the available and useful standards. Here are screenshots showing how three common browsers cope with the test:

Here are screenshots of some old and some yet-to-be-released browsers: (Comparing Netscape 6.1 and a recent Firefox nightly build shows how far the Gecko layout engine has come since August 2001.)

Hopefully the Acid2 will inspire all the browser makers to further improve their standards compatibility. He who lives shall see.

Update: Reduced the size of the screenshots a bit.

Update 2005-11-02: Safari now passes the test! HamsterDeCombast posted a screenshot in the comments.

The great thing about open source programs like Firefox is the steady, never-ending stream of improvements and bugfixes. Here are some of the recent fixes, which will appear in Firefox 1.1:

Of course, this is on top of some fairly major improvements already made:

Also, maybe of minor importance, but good for website devs:

For up-to-date info on fixed bugs in Firefox, see the Burning Edge